BAE Systems at its Rochester site can celebrate over 100 years as a supplier of aircraft equipment. 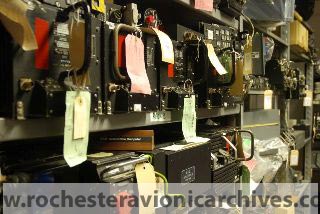 The company names have changed over the years but the engineering and production challenges have been a constant feature. The present day employees can feel proud of that heritage, but equally can learn from the way in which the problems were solved in the past with technology that might be regarded as simple nowadays but was breaking edge then.

The Rochester Avionic Archives (RAA), located within BAE System Rochester, aims to preserve a record of the products and generate pride in the people who helped create the company.
The objectives of the RAA are: -

The collection exceeds 1700 pieces of equipment from HUDs to Air Data Computers and also has a substantial archive of Brochures, Company Newspapers, Films, Videos and photographs. The oldest avionic item is a Spitfire Reflector Sight but the majority of the items are of post war origin. The emphasis is on equipment made or relevant to the Rochester site and the work of Elliott Bros, Marconi and BAE Systems.

*In 1900 Elliott Brothers moved from Central London to Lewisham to the factory named Century Works, presumably marking the turn of the century. Very little in the way of old instruments survived the 1900 move. Sometime before 1950, to mark the supposed 150th year of the company’s commencement, the new Chairman (Sir) Leon Bagrit asked for artefacts and documents with which a company museum could be set up. From within the company and through gifts and advertisements over two hundred objects emerged. The earliest was a fine case of drawing instruments by William Elliott and dated 1841. Meanwhile from within the company over one thousand documents were assembled, the earliest being William Elliott’s own apprenticeship indenture of 1795, and some appertaining to Watkins & Hill, the well-known instrument manufacturer taken over by Elliott Brothers in 1856.

The Elliott Archive was rescued from Elliott’s long-established site at Lewisham when that part of the GEC business was disposed of and was housed at GEC Avionics Ltd at Rochester in Kent, At Rochester it was sorted and an initial catalogue was compiled, and some access was arranged for researchers, but that was not to be its permanent home. In the subsequent reorganisations occurring within GEC, the Elliott Archive and Collection became the property of the Marconi Corporation and spent the next few years in inaccessible locations in Essex. However, because of the difficulties befalling the Marconi company, this important historical material once again was at risk of being sold or broken up. Fortunately these plans collapsed and at short notice in 2003 the Museum of the History of Science at Oxford was able to accept the archive material and the objects. They are now in a proper museum environment, accessible to researchers and receiving the professional care appropriate to this rare historical source.

*The text hereon was kindly provided by H.R. Bristow. It was due to the efforts of Mr Bristow that the original Elliott Archive and Collection was safely transferred to the Museum of the History of Science at Oxford and his assistance is appreciated in helping to set up the RAA at Rochester.