This is a model of the CPU-152A configuration for the S-3 Viking. 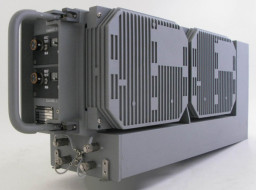