The Triplex Transducer Unit (TTU) was fitted to the Tornado IDS and ADV and is part of the Command Stability Augmentation System (CSAS). The CSAS system comprises an electrical link from the pilot's controls to the taileron, rudder and spoiler controls. This link is modified by computers to give good handling qualities at all times (“fly-by-wire”). Mechanical reversion exists for the taileron controls only. Control is by means of triple sensing and computing of which the TTU provides "fail safe’ air data information derived from processing of the input from three pairs of independent Pitot and Static ports. The TTU has a robust, modular construction with three air data capsules and unique processing channels.
(The system, is produced by Marconi Avionics Instrument Systems Division, Combat Aircraft Controls Division, Rochester.)
This unit has ISD inspection seals. 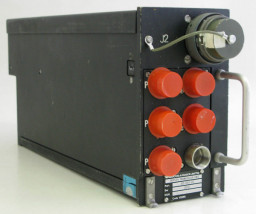