For Pioneering research, development and production of head-up displays (HUDs) that improve the safety of civil aircraft operations during take-offs, approaches and landings.

With 13,000 HUDs installed in more than 50 variants of military aircraft and civil aircraft, the technology provided by BAE Systems has enabled flight crews to manually conduct approaches with autoland precision airports that have limited landing aids. The Visual Guidance System (VGS), introduced in the mid-1990s, has been adopted by air carriers and operators of business jets. VGS hardware, software, procedures and training have enhanced pilots' situational awareness and reduced their workload during critical phases of flight.

BAE Systems has stimulates the trend of increased use of HUDs, which international pilot organizations and safety professionals have advocated as a potent tool that is currently available for safety enhancement. Reducing risk during takeoffs, approaches and landings in low-visibility weather conditions also has minimized diversions, delays and airline-passenger inconvenience, which indirectly helps to improve overall safety by favorably influencing the economics of operation.

Flight Safety Foundation and the award's sponsor, the friendship fund, are pleased to recognize the corporate leadership and contributions of BAE Systems to aviation safety.

Established in 2002, this award is made possible by a gift from the Friendship Fund in honour of Richard Teller Crane, who died in 1996. Crane was a pilot who, with his friend David Morrison, launched an organization called Flight Safety Foundation in 1945 to study human factors in the design of aircraft cockpits. In 1947, that organization combined with another study group, Aircraft Engineering for Safety, led by Jerome F. “Jerry” Lederer. The vision of these founders carries on today as Flight Safety Foundation.

The Richard Teller Crane Founder’s Award recognizes sustained corporate leadership through lasting contribution to, or support of, aviation safety and safety programs and is presented every other year in conjunction with the annual International Air Safety Summit (IASS). ( See http://flightsafety.org/aviation-awards/the-richard-teller-crane-founders-award )
In 2003 BAE Systems was presented with this prestigous award for pioneering research, development and production of head-up displays (HUDs) that improve the safety of civil aircraft operations during take-offs, approaches and landings. 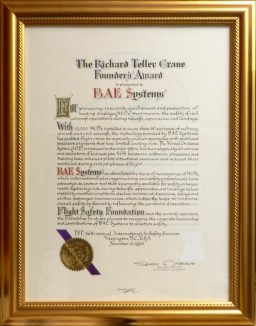