In May 1971, the Air Force Prototype Study Group funded several proposals, one being the Lightweight Fighter (LWF). The Request for Proposals issued on 6 January 1972 called for a 20,000-pound (9,100 kg) class air-to-air day fighter with a good turn rate, acceleration and range, and optimized for combat at speeds of Mach 0.6–1.6 and altitudes of 30,000–40,000 feet (9,100–12,000 m). This was the region where USAF studies predicted most future air combat would occur. Increased interest would turn the LWF into a serious acquisition program. North Atlantic Treaty Organization (NATO) allies Belgium, Denmark, the Netherlands, and Norway were seeking to replace their F-104G fighter-bombers. In early 1974, they reached an agreement with the U.S. that if the USAF ordered the LWF winner, they would consider ordering it as well. The USAF also needed to replace its F-105 and F-4 fighter-bombers. The four NATO allies had formed the "Multinational Fighter Program Group" (MFPG) and pressed for a U.S. decision by December 1974; thus the USAF accelerated testing. To reflect this serious intent to procure a new fighter-bomber, the LWF program was rolled into a new Air Combat Fighter (ACF) competition in an announcement by U.S. Secretary of Defense James R. Schlesinger in April 1974. Schlesinger also made it clear that any ACF order would be in addition to the F-15, which extinguished opposition to the LWF. Though computer modeling predicted a close contest, the YF-16 proved significantly quicker going from one maneuver to the next, and was the unanimous choice of those pilots that flew both aircraft.
On 13 January 1975, Secretary of the Air Force John L. McLucas announced the YF-16 as the winner of the ACF competition and the prototype YF-16 was rolled out at Fort Worth on December 13, 1973. This circular, embroidered sew-on badge probably dates from the early 70’s. 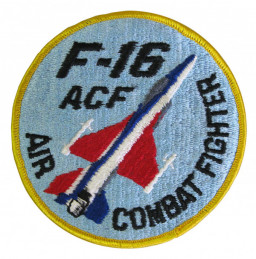