MLRS
To the management and staff of
GEC Marconi Avionics Limited
Guidance & Display Division
Rochester, Kent, UK
in appreciation of the successful contract
performance and professional assistance rendered
throughout the programme.

The M270 Multiple Launch Rocket System (M270 MLRS) is an armoured, self-propelled, multiple rocket launcher; a type of rocket artillery.
Since the first M270s were delivered to the U.S. Army in 1983, the MLRS has been adopted by several NATO countries. Some 1,300 M270 systems have been manufactured in the United States and in Europe, along with more than 700,000 rockets. The UK, Germany, France and Italy collaborated on the European MLRS programme and this gave a second production source. The production of the M270 ended in 2003, when a last batch was delivered to the Egyptian Army.
In 2006, MLRS was upgraded to fire guided rounds and in March 2007, the British Ministry of Defence decided to send a troop of MLRS to support ongoing operations in Afghanistan's southern province of Helmand.
This Plaque records the work that GEC Marconi Avionics through its Guidance Systems Division carried out to develop the Stabilisation Reference Package guidance system This is a gyro compass that provides direction, elevation and cant angle to the on-board computer. The gyros were made under licence from Bendix. 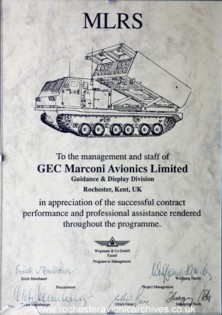