This is a model of F-16A Tail No. 75-0746 which was built in 1977. In 1982 it was based at Langley AFB to test a decouple pylon concept. The aircraft received the larger block 15 stabilisers and the tail also received the extended tail housing for a parachute during this time. In 2004 it was decommissioned to become a Gate Guardian at McEntire ANGB, South Carolina.
This model is in the colours of the YF-16 but the fin was never marked YF-16. The tail number 72-01568 shows this to be the second prototype YF-16 aircraft. The aircraft made its first flight on 9th May 1974 and in 1982 it was to be found mounted on a mast at Rome ADC for non-flying electronic testing.

In January 1972 the Lightweight Fighter Programme asked for designs from several American manufacturers. In January 1975 General Dynamics was pronounced the winner with the YF-16. Since its small beginning with an initial USAF order for 650 aircraft, the F-16 has become one of the largest and most successful military aircraft in aviation history. At least 23 countries have purchased the F-16 in various forms. The Company supplies the Head Up Display. 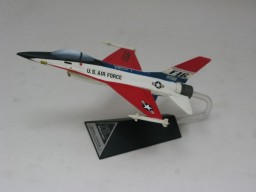