The practice seemed to be that a plaque would be presented to the Company on the occasion of a visit by military personnel.

This is a wall-hanging wooden plaque with heraldic badge from the Royal Netherlands Air Force, 306 Squadron. 306 Squadron was founded in 1953; its mission was photo reconnaissance. For almost fifty years the 306 Squadron would be the only squadron in the Royal Netherlands Air Force with this mission flying the F-84E, RT-33, RF-84F, F-104, RF-16 and the MLU F-16. In its early years, the squadron was stationed at various airfields (RAF Gütersloh, Bückeburg, Laarbruch, Deelen, Twenthe) before finally being based out of Volkel. The credo of the squadron, VIDERE VINCERE EST (meaning ‘To see is to conquer.’), reflects the capability to perform the difficult task of visual reconnaissance as well as the use of the reconnaissance pod. With the introduction of the F-16 Mid-Life Upgrade in 2000, all RNLAF aircraft were capable of carrying the reconnaissance pods instead of the just the RF-16. The exclusive reconnaissance mission came to an end and the squadron received a new training mission but that too came to an end in April 2007 as the mission was moved to the 178th Fighter Wing, Ohio ANG, Springfield, USA. The spirit of the 306 Squadron lives on in the 178 FW as the 306 Detachment. 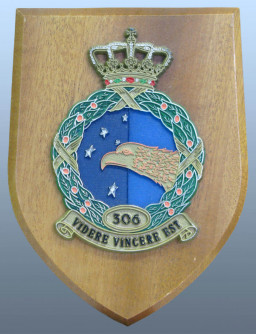