This Accelerometer was used on the Handley Page Victor. It is calibrated from -4G to +8G. The date code is handwritten as 2/55 and there is a second date of 4/60. The first date may be the date of manufacture and the second could be a maintenance date. The Serial No. is not currently known.

Accelerometers measure the linear acceleration of the moving vehicle in the sensor or body frame, but in directions that can only be measured relative to the moving system (since the accelerometers are fixed to the system and rotate with the system but are not aware of their own orientation). Accelerometers are electromechanical devices that will measure acceleration forces. These forces may be static, like the constant force of gravity, or they could be dynamic - caused by moving or vibrating the accelerometer. By measuring the amount of static acceleration due to gravity, you can find out the angle the device is tilted at with respect to the earth. By sensing the amount of dynamic acceleration, you can analyse the way the device is moving.

The sensing element is a pendulous mass, free to pivot by being mounted on a bearing. A spinning gyroscope is attached such that it would restrain the pendulum against "falling" in the direction of acceleration. The pendulous mass and its attached gyroscope are themselves mounted on a pedestal that can be rotated by an electric torque motor. The rotational axis of this pedestal is mutually orthogonal to the spin axis of the gyroscope as well as the axis that the pendulum is free to move in. The axis of rotation of this pedestal is also in the direction of the measured acceleration.

The position of the pendulum is sensed by precision electrical contacts or by optical or electromagnetic means. Should acceleration displace the pendulum arm from its null position the sensing mechanism will operate the torque motor and rotate the pedestal such that the property of gyroscopic precession restores the pendulum to its null position. The rate of rotation of the pedestal gives the acceleration while the total number of rotations of the shaft gives the speed, hence the term "integrating". A further level of integration of shaft rotations by either electronic means or by mechanical means, can record the displacement or distance travelled, this latter mechanical method being used by early guidance systems prior to the availability of suitable digital computers.

In most implementations the gyroscope itself is cantilevered on the end of the pendulum arm to act as the pendulous mass itself. Up to three such instruments may be required for each dimension of an INS with the three accelerometers mounted orthogonally generally on a platform stabilized gyroscopically within a system of gimbals.

Inertial navigation combines the constant direction-seeking properties of gyroscope with accelerometers and integrators to provide a navigation system with the following properties:

(1)   Its own initial definition of True North on the ground, by the technique known as gyro-compassing.

(3) Definition of the local vertical under all flight conditions.

(5) If fitted with a third vertical accelerometer whose integrated outputs are monitored by barometric height, it can also provide instantaneous vertical velocity. 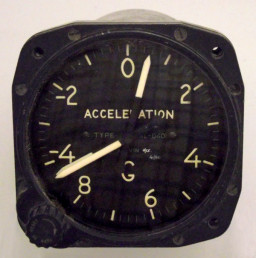