This is the transducer fitted behind the crosswind input control
It has a 19-way connector at one end and ±¼-turn shaft at the other.
Various markings declare:
"Tested On Date 26 Oct 1972"
"Caution
"This unit contains precision potentiometers
"Do not use ohmmeter with current
flow greater than 1(one) milliampere
when checking continuity or setting nulls"

The Lockheed C-5 Galaxy is a large military transport aircraft built by Lockheed. It provides the United States Air Force (USAF) with a heavy intercontinental-range strategic airlift capability. The C-5 Galaxy has been operated by USAF since 1969.

The C-5 has a nose gear with four tyres and two sets of main gear positioned one directly behind the other. The main gear “trucks” are fitted with six tyres each, two in front of the strut and four behind. There are a total of 28 tyres, all the same size. The first C-5A was rolled out in March 1968 and this A-model was built with crosswind gear capability.
Once the landing gear was extended the dial on the control panel was turned a certain number of degrees based upon the crosswind component and the approach speed. Up to 20 degrees of correction could be used. This allowed the aircraft to be crabbed into the wind while the wheels (nose and all mains) were aimed straight down the runway. The aircraft was landed while aimed, for example, 20 degrees off the runway heading. Then the roll out continues with the C-5’s body still pointing off the runway centre-line. When the aircraft was slowed to about 5 knots during the landing roll, the dial was slowly rotated back to the zero position and the fuselage rotated back to align with the landing gear. This must have been a very odd sensation for the pilot especially when trying to taxi in a straight line!
This facility was also useful when making tight turns while taxiing on the ground. The type of main landing gear arrangement, with the two sets of main gear in tandem, made it difficult to turn sharp corners. For example in a left turn the aircraft is started into the turn, the aircraft commander calls “caster” and the switch is opened allowing the aft set of gear to turn right, swinging the tail of the aircraft around the turn. As the aircraft starts to roll out of the turn, “centre” is commanded, the switch is closed and the aft main gear are hydraulically driven back to line up with the forward main gear. This is controlled by a switch on the centre console in the cockpit operated by the copilot as directed by the aircraft commander.
This capability has been removed from all the remaining A-model aircraft and was not fitted to the B-model; apparently the upkeep vs. usage ratio was too great to keep it installed. 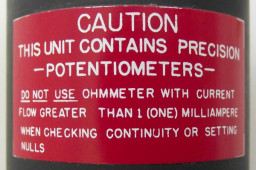