The British Army ordered over 100 Westland Aerospatiale Lynx for a variety of roles, from tactical transport to armed escort, antitank warfare , reconnaissance and casualty evacuation. The Lynx AH.1 first entered service with the Army Air Corps (AAC) in 1979.
This is a model of the Engaging Controller which forms part of the Mk34 AFCS system which provides attitude stabilization in the pitch and roll axes. Stabilization demands are fed to limited authority series actuators which in turn drive the main powered flying controls. In the yaw axis the system operates as a yaw rate damping system to stabilise the aircraft during manual and automatic flight. The Engaging Controller provides pilot control for the engagement of the total auto-stabiliser and the disengagement of each auto-stabiliser lane in each axis, also the engagement of each autopilot mode (with the exception of the Cable and Transition modes). Facilities are also provided for pitch, roll and heading trimming. All switches are illuminated on engagement. 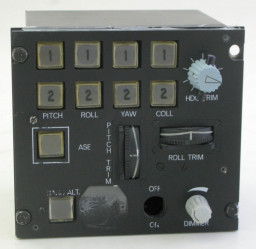