The course deviation indicator has a rotating compass card behind a fixed aircraft silhouette and lubber line. A marker and digital counter may be used to set desired course against the compass card and a heading marker is provided. Linked with the course marker and occupying the centre of the dial is a left/right needle which provides simple VOR/ILS deviation information. It rotates with the course marker to give a semi-pictorial indication of the relationship of the aircraft to a VOR or ILS beam. A normal glide-slope deviation needle remains horizontally aligned. The pilot thus has a "straight" plan-position indicator and a computing director instrument.

The Ref. No. 6TK4543009 is on the instrument which was probably built by Elliotts under licence from Bendix. The Instrument was repaired at Rochester in July 2005.

The flight director computes and displays the proper pitch and bank angles required for the aircraft to follow a selected flight path. The flight director instrument system on the VC10 is considered as an alternative to the autopilot for all modes except automatic flare-out and for this reason is integrated with the automatics to only a limited extent. It derives its attitude and compass signals respectively from the main vertical gyros and Polar Path compasses and takes radio information from either group of radio receivers.

These signals are electrically separated from the autopilot as far as is practicable. The system is of necessity duplicated in that each pilot has his own course deviation indicator and horizon director indicator but only a single flight steering computer is provided. The attitude displays have independent absolute monitors consisting of circuits which check the vertically of the gyro and the continuity and operation of the transmission system. Failure warning is by a flag in the horizon indicator. Additionally there are comparator units between the horizon displays and between the compass systems which illuminate warning lights in the event of a difference between the two sides. Comparison is effected mechanically through torque synchros so that electrical isolation between the systems is maintained.

The system, supplied by Elliott Brothers (London) Ltd, is based largely on components of the well-proved Bendix PB-20 autopilot, made under licence by Elliott, and interchangeable with American built components as installed in Boeing 707s. 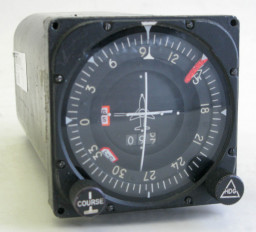