This is an experimental linear actuator developed for Concorde or TSR-2 in 1964.This item was in the original Elliott Collection Ref: 2000

It was in 1950 that Elliott Bros. set up a small team to try to break into aircraft automation, In 1958 work was started at Borehamwood on a new automatic flight control system for the English Electric TSR 2, a high performance aircraft for use both for strike and reconnaissance purposes. The complete system of automatic control equipment, hydraulic power controls, simulated control surface forces, and simulated characteristics was assembled at Rochester.

The Quadruplex Actuator comprises four separately controlled electrohydraulic actuators which are individually coupled to a common output member by clutch plates rotating around the common output shaft. The Actuator is normally utilised as a position servo, separate and isolated servo-amplifiers being used for each of the four lanes to sum the position demand input and the position feedback and provide a drive for the electrohydraulic valve of each lane. The operating pressure is 3000lbf/in2

A working demonstrator built in perspex and opearted from a pneumatic air supply to illustrate the basic concept was shown at the SBAC Exhibition at Farnborough in 1963. A Quadruplex Actuator was first supplied in linear form in 1964 for the FIAT G95 VTOL rig followed by a similar set for the Dornier DO31 simulator rig. The lightweight rotary form was developed under a Ministry of Technology contract for a Failure Survival Autostabilization System.

In 1970 the company won the prime contract for development of the Command Stability Augmentation System (CSAS) and Autopilot/Flight Direction System (AFDS) for Tornado. The design of the Tornado Quadruplex Actuator was that of Stafford Ellis the most prolific inventor in this company’s history. Tornado has an advanced “fly-by-wire” control system. This entails electrically signaling the commands from the pilot’s control column to the aircraft’s flying controls and solves the problems which are associated with mechanical control systems on aircraft with advanced performance and variable wing-sweep angles. Electrical signaling also enables the control response to be supplemented electronically, so compensating for the wide variations in aircraft characteristics over its wide flight envelope.

The taileron and rudder power control servos each embody a quadruplex electrohydraulic actuator which converts the electrically-signaled control surface demands into mechanical movements and enables the system to survive failures to an extent compatible with the electronic computing and main hydraulic power control elements in the system. Fairey Hydraulics developed the Tornado actuator under licence from Marconi Elliott Avionics and adapted the hydraulic design to suit the specific requirements of the Tornado. The quadruplex actuator was developed as an integral part of the taileron and rudder power control units which Fairey Hydraulics supplies. The Quadruplex Actuator was fitted to all variants of the Tornado. 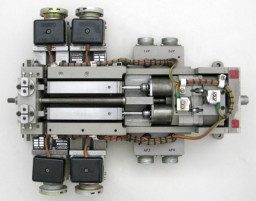