This unit is the control unit for the Pedal Shaker which takes inputs from the Angle of Attack Sensor, Gear and Flap settings and when a stall situation is detected it outputs a signal to initiate the Pedal Shaker.

EAP stands for "Experimental Aircraft Programme and was a technology demonstrator for what was to become the Eurofighter Typhoon. The sole aircraft (serial ZF534) first flew on 8 August 1986. The EAP aircraft was retired from service on 1 May 1991 and was then sent to the Aeronautical and Automotive Engineering department of Loughborough University but as of April 2012 it has been moved to the Royal Air Force Museum Cosford.

This Unit is part of the Flight Control system and is put into operation when the onset of a stall is detected. The system uses the Angle of Attack Transmitter mounted on the nose and other inputs such as gear and flap position and when it senses an impending stall it will activate the Shaker.

Marconi Avionics, in common with other suppliers, made equipment for the EAP at their own cost in anticipation of orders for the Typhoon. Around 6 to 8 sets of equipment were made and all were put through the full evaluation/qualification tests. 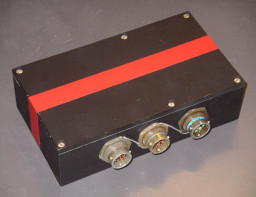