This is a Mk1 version of the Rotary Actuator

Linear Actuators: On aircraft linear actuators may be used for flight control surfaces, wing flaps, and spoilers. Hydraulics deliver a great deal of power without taking up too much space or weight, meant that they massively help pilots in undertaking necessary mechanical tasks without using too much energy.

The other advantages of hydraulics are the quick response to the demands that may be placed upon the system. They are also reliable and reasonably easy to maintain. Because they do not use electricity, there is no chance of a shock hazard, and the chances of being a fire hazard are low, which makes them a safer option than other equivalent systems.

Perhaps the main advantage of a hydraulic system is that they can handle a practically unlimited amount of work due to the immense force they can produce. This is all the more important in modern day aircraft.

Hydraulic fluid is pumped from a reservoir, either by an electric, or engine driven pump. It is filtered to keep it clean, and then passes through a selector valve, which relieves extra pressure.

Once it reaches the linear actuator, the fluid power is turned into work by a piston. This power is then used to move an aircraft system or flight control. These actuators can be either single or double acting, depending on the requirements of the system, meaning that the fluid can be applied to one or both sides of the actuator. The selector valve allows for the fluid direction to be controlled, which is necessary for operations such requiring extension and retraction.

The actuating cylinder also contains a reduction gear, which allows it to control the rotating motion to what is needed within the system. Previously, systems would use steel cables connected by pulleys to control motion. The cables that connected the controlling mechanism, such as the pedals, to the controlled surface, such as the rudder, would be subject to expansion due to temperature changes. Hydraulic systems though, are capable of controlling motion without worrying about such concerns, as they do not operate in an environment that is not open to the atmosphere. This means that hydraulic systems not only provide better control for the pilots using them, but also increase response times, making them an imperative part of aerospace engineering.

Stepper motors are a form of electric motor that has the ability to move in discrete steps of a fixed size. This can be used either to produce continuous rotation at a controlled speed or to move by a controlled angular amount. If the stepper is combined with either a position encoder or at least a single datum sensor at the zero position, it is possible to move the motor to any angular position and so to act as a rotary actuator.

A servomotor is a packaged combination of several components: a motor (usually electric, although fluid power motors may also be used), a gear train to reduce the many rotations of the motor to a higher torque rotation, a position encoder that identifies the position of the output shaft and an inbuilt control system. The input control signal to the servo indicates the desired output position. Any difference between the position commanded and the position of the encoder gives rise to an error signal that causes the motor and geartrain to rotate until the encoder reflects a position matching that commanded.

Hydraulic power may be used to drive an actuator, usually the larger and more powerful types. Fluid power actuators are of two common forms: those where a linear piston and cylinder mechanism is geared to produce rotation (rack and pinion), and those where a rotating asymmetrical vane swings through a cylinder of two different radii. The differential pressure between the two sides of the vane gives rise to an unbalanced force and thus a torque on the output shaft. Vane actuators require a number of sliding seals and the joints between these seals have tended to cause more problems with leakage than for the piston and cylinder type. The three most commonly used types are, vane and helical. 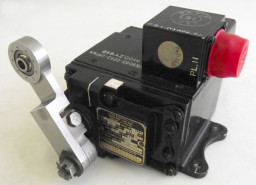 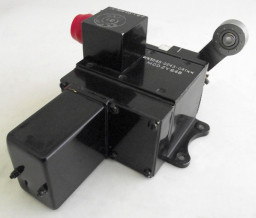