The Flight Control Computer (FCS) interfaces between the electrical signals from the pilot's yoke and controls the four tail surfaces (two rudders and two elevators) over a fibre-optic link. The FCS also monitors the "health" and status of the actuation system and can be extended to provide autopilot modes by interfacing the appropriate sensors. 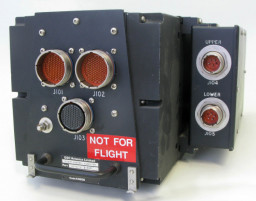