The rotor in this unit is large, more like a paddlewheel than the in-line rotor in the later units. There is an ‘X’ in the Serial Number which suggests that it was a prototype or an experimental design.

The Elliott flowmeter system on the Trident was developed specifically for the requirements of the commercial jet fleets flying the world's air routes. The transmitter was developed from the well-proven variable orifice type units that Aircraft Engine Instruments Division had manufactured for a wide range of civil and military aircraft, and has an accuracy of ± 1.0% of actual flow rate over the cruise band.

A similar unit, Type 7801-11000, was designed for direct engine mounting to the Rolls-Royce Spey. 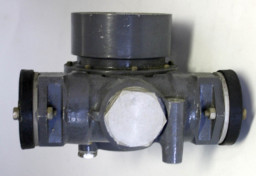