This Indicator gives the fuel flow rate in lb/min but does not display the total flow. It is likely that this Indicator was fitted to the Trident.

Instruments for the measurement of fuel tank capacity and flow seem to have been made by a number of companies such as Simmonds Aerocessories of London who advertised the product in 1952 and in that year they acquired Firth Cleveland Instruments and as that became the overall company name from 1953 onwards they are found under the Firth Cleveland Instruments name. Elliott Bros purchased Firth Cleveland Instruments in 1961 and continued the brand from the Treforest works where they also made Flowmeters and Test sets for these.
Originally the system would include the Transmitter which sensed the fuel flow in the feed line, an Amplifier which amplified and processed the signal from the Transmitter and an Indicator which gave a read-out in lbs/min. Basic signals are generated by the magnetic rotor of the flow transmitter, signal frequency being proportional to the volumetric fuel-flow. Fed to the integrator, the signal emerges as two distinct outputs in the form of a direct current proportional to rate of flow and pulses proportional in number to the total quantity of fuel passed. The two output signals are then fed to the cockpit instrument, which gives presentations of rate of flow as a needle on a dial, and totalized flow as a digital counter. Corrections for variation in fuel density may be made manually or automatically. By 1964 the Company was offering an Indicator which contained the amplifier/integrator saving weight and gaining- ±0.75% in accuracy. With the new Fuel Flow Test Lab in action the Company was by now a major supplier in fuel instrumentation. 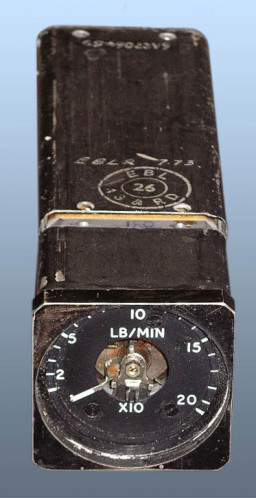 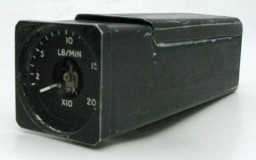 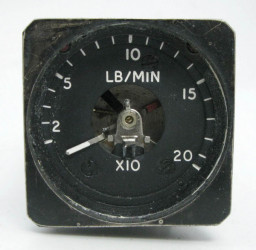