The transmitters apply measurement techniques similar to the Marconi-Elliott Avionic system supplied for the VC10, Phantom and Harrier aircraft. For the Tornado, however, a turbine is used as the driving element in place of the conventional electric rotor. Turbine speed is controlled by a spring-operated valve, which allows some fuel to by-pass the turbine at high flow rates.

This new design feature improved transmitter reliability, significantly reduced transmitter size and weight, eliminated the need for an electrical power supply and, allied with improvements to the pulse pick-off, has allowed the transmitter harness to be reduced to three wires in an enveloping screen.

System development was conducted by Marconi-Elliott Avionic Systems Limited at Rochester. In production the system was also manufactured by Teldix of Germany and OMI of Italy under the work sharing agreement.

Tornado has one Fuel Flow Indicator with two pointers, marked ‘L’ and ‘R’ for the two engines. The legend is kg/min up to 60kg/min. This pattern of Indicator is  installed in the Tornado GR1,GR4 (and other variants) with the range increased to 75kg/min. However a single pointer Fuel Flow Indicator appears to have been used on the same variants and this needs to be clarified.

'The published climb speed was 450 knots but, unless the pilot maintained a good instrument scan, the aircraft would inevitably go supersonic between 15,000 and 20,000 feet. That exercise also helped to generate great awareness of fuel consumption, the fuel flow meters being against the top stops.' 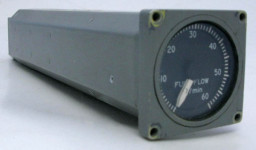 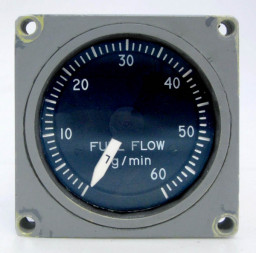