These Fuel Tank Gauges work on a capacitive system whereby the tank unit is the capacitor and the fuel is a variable dielectric. The electronic circuits are calibrated to transmit this as a tank quantity.

The ‘Pacitor’ system seems to have been made by a number of companies such as Simmonds Aerocessories of London who advertised the product in 1952 and in that year they acquired Firth Cleveland Instruments and as that became the overall company name from 1953 onwards they are found under the  Firth Cleveland Instruments name. Elliott Bros purchased Firth Cleveland Instruments in 1961 and continued the brand from the Treforest works where they also made Flowmeters and Test sets for these. The former were used with the Beverley, Belvedere, Argosy 660 and long-range Britannia, while the latter were for fuel-flow systems in the refuelling portion of the Valiant tanker and in the Javelin, Buccaneer, Scimitar, Sea Vixen and Sea Venom

In addition Elliotts seem to be making Tank Units under a licence from Honeywell which may be because the an improved design was covered by a US Patent. 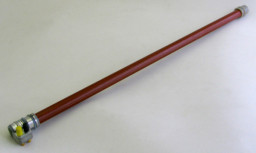