This is a small module which would have been hard wired onto a larger module or a printed circuit board. The casing can be removed to show the transformers inside.

The magnetic amplifier (generally known as the "mag amp") is an electromagnetic device for amplifying electrical signals. The magnetic amplifier was invented early in the 20th century, and was used as an alternative to vacuum tube amplifiers where robustness and high current capacity were required. World War II Germany perfected this type of amplifier, and it was used for instance in the V-2 Rocket. The magnetic amplifier has now been largely superseded by the transistor-based amplifier, except in a few safety critical, high reliability or extremely demanding applications. Essentially the mag amp is a saturable reactor. It makes use of magnetic saturation of the core, a non-linear property of a certain class of transformer cores. For controlled saturation characteristics the magnetic amplifier employs core materials that have been designed to have a specific B-H curve shape that is highly rectangular.

The typical magnetic amplifier consists of two physically separate but similar transformer magnetic cores, each of which has two windings - a control winding and an AC winding. A small DC current from a low impedance source is fed into the series-connected control windings. An AC voltage is fed into one AC winding, with the other AC winding connected to the load. The AC windings may be connected either in series or in parallel, the configurations resulting in different types of mag amps. The amount of control current fed into the control winding sets the point in the AC winding waveform at which either core will saturate. In saturation, the AC winding on the saturated core will go from a high impedance state ("off") into a very low impedance state ("on") - that is, the control current controls at which voltage the mag amp switches "on".

A relatively small DC current on the control winding is able to control or switch large AC currents on the AC windings; this results in current amplification. The initial design work was carried out by Dr. E.H. Frost-Smith at Borehamwood. However this design was soon abandoned in favour of improvements initiated personally by Ron Howard. Significant work on the high temperature aspects was carried out by Jack Stewart. Many such amplifiers were used in Elliott’s highly successful Autostabiliser for the English Electric Lightning. 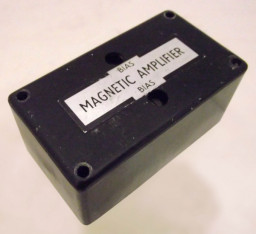 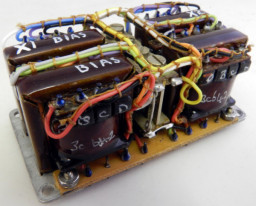