In the mid-1950s germanium junction transistors were becoming available from several manufacturers and a detailed investigation was carried out to assess their suitability for avionic applications. One of the outcomes was a standard general-purpose transistor amplifier 3C5 161 which was used in a number of Elliott avionics programmes. At that time there were several large active avionic projects in the pipeline, notably the Blue Steel inertial navigation system for the V-bomber force, the automatic flight control systems for the Lightning and Buccaneer aircraft, 0R946 (OR946 was a de facto standard for a set of Navigation Display instruments (e.g. attitude indicator, altimeter, flight director, airspeed indicator and standby versions of them, etc.); amongst others. At that stage, silicon transistors were not available and the voltage, power handling and temperature limitations meant that transistors were restricted in application to low-level applications and thermionic valves and magnetic amplifiers were used where large voltage or power handling was required.

The amplifier had 2 stages of Class-A amplification using Mullard 0C71 germanium transistors and a Class-B push-pull output stage with two OC72 germanium power transistors. The actual power available from the amplifier was severely limited by the high ambient temperature in which it was to work which imposed limits on the allowable internal dissipation. The design gain was in the order of 2000-5000 and the design load was 400 ohms which represented the input impedance of the following ring demodulator and magnetic amplifier. Tantalum capacitors produced by Plessey were used for coupling and decoupling because of their high capacity, small size, and ability to withstand high temperatures. (The low impedances in transistor circuitry necessitated the high capacitances.)

These transistor amplifiers were used in some numbers in the inertial navigator for Blue Steel where they functioned as pre-amplifiers for a 5 watt magnetic amplifiers Type 3C516 driving Sperry motor-tacho servos, and similarly for a 9-watt magnetic amplifier. Similar arrangements were used in the 0R946 barometric air data computer and flight control system. As the servo was a 400Hz carrier system, the amplifier did not need a wide bandwidth and thus small transformers could be used.

In the Blue Steel inertial navigator the transistor amplifier was used as a pre-amplifier for 5 watt and 9 watt magnetic amplifiers in the gyro and computing servo arrangements. This gave a measure of standardisation, although most of the electronic circuitry in the navigator was specially designed using a mixture of thermionic tubes, magnetic amplifiers, germanium transistors and, in the power supplies, silicon diodes and power transistors.

The amplifier was produced in quantity; more than 20,000 are believed to have been made.

(Thanks to R. Bristow for permission to use this text)

The Transistor Amplifier and the Magnetic Amplifier were both used in the Fuel Flowmeter systems on the listed aircraft as part of the 3C742 Amplifier.

This item was part of the original Elliott Collection Ref: 2008 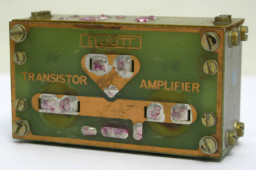 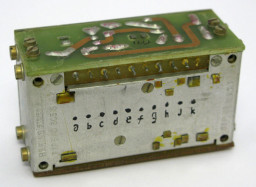