Initial studies of fault-tolerant avionics were conducted jointly with Cranfield in 1984, but the idea had been around in the company since the late 1970s. The research was directed at safety and economy in control, and particularly at effectively zero maintenance.
A Boeing request initiated the work, which had been going on for 21 months, continuing from some Boeing 7J7 fly-by-wire (FBW) prototype studies.
The target was a fit-and-forget electronic flight control system with a probability of total failure of the order of 10⁻¹⁰, and a 95 per cent dispatch probability even after 30,000 operating hours in situ.
GEC Avionics proposed an FBW control system based on three lanes served by three quadruple-element primary flight control units (PFCUs). Each uses a dissimilar processor, and each runs a software package that is dissimilar from the other two.
The configuration proposed consists of: Inmos Transputer T414 with Occam software, Motorola 88020 with Ada, and Intel 80386 with "C".
Each PFCU and its 12 cards is housed in a 10MCU Arinc 600 box and is to perform under passive cooling up to an environmental temperature of 85°C. The design maximises chip integration, avoiding internal connections, while external connections will be minimised. The 7J7 programme was cancelled but the technology was transferred to the Boeing 777.
The 777 first entered commercial service with United Airlines on June 7, 1995. It has received more orders than any other wide-body airliner; as of September 2015, 60 customers had placed orders for 1,881 aircraft of all variants, with 1,340 delivered. The most common and successful variant is the 777-300ER with 596 delivered and 786 orders; Emirates operates the largest 777 fleet, with 147 passenger and freighter aircraft as of September 2015.

This circuit Module is an I/O MODULE from the Boeing 777 Primary Flight Control Computer. 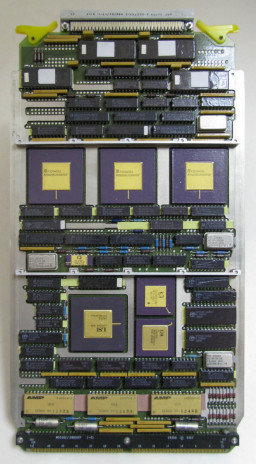 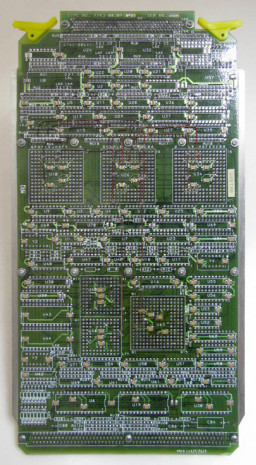