This is a 25mm (1inch) tube with a fibre-optic faceplate.

A CRT can run in 2 modes:
Cursive- this is where lines are vector drawn on the screen. Only a small area of the screen is illuminated but very high luminance levels are achievable (~10,000fL)
Raster- this is where the whole screen is covered by scanning – as in conventional TV. Luminance is lower (~3,000fL)
The two can be mixed by doing the cursive writing during the flyback of the raster scan.
On the down side, high resolution CRTs are generally limited to one colour (usually green), are based on valve technology, involve high voltage (up to 13kV) and are heavy (a 1” CRT weighs about 80g)
A nominal 1” CRT can (just) achieve SXGA resolution, they are obsolescent resistant, and have a good temperature range. They are not a pixilated device so any distortion correction (to offset any optical distortion elsewhere) can be achieved without necessarily losing resolution.

A CRT in a Helmet Mounted Display will often have a fibre-optic faceplate which is a coherent fibre optic plate that precisely transmits an image from its input surface to its output surface. A fibre-optic faceplate (FOP) is composed of millions of fibres fused together in parallel array. It is capable of transferring high-resolution image from on end to another. So it is widely used in high-resolution image transferring, magnification, reduction and inverting in image intensifiers and CRTs. In this case it is used for field-flattening and distortion correction. 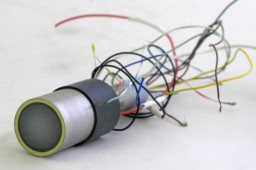