An embroidered sew-on badge portraying a cat's face. These badges may have been sewn on the flight suits of US Marine Corps pilots.

In March 1982 a demonstrator was produced which had a field of view of 45deg horizontal and 30deg vertical and achieved all the design targets with a low head mounted mass and minimum moment about the pilot's head. Favourable evaluation lead to the manufacture by the Airborne Display Division of flyable prototypes. A story from the early trials was that a set of Goggles was sent up to the Harley Street Institute of Opthamology for tests on the peripheral vision while wearing them. 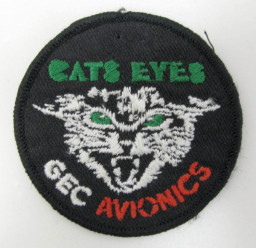