This is a United States Helicopter Flight Helmet type SPH-4 made by Gentex. The helmet has the liner, headset, visor, but is missing the microphone, and manual.
In 1970 the U.S. Army fielded the Sound Protective Helmet No. 4 (SPH-4) as its new aircrew helmet and, with improvements, it has been used continuously since that time. (at least to 1991) The SPH-4, a single visor, lighter weight version of the Navy SPH-3, replaced the two Army aircrew helmets then in use: The Navy-developed Aircrew Protective Helmet-No. 5 (APH-5) and the Army-developed Antifragmentation Flight Helmet-Nc. 1 (AFH-1). Both helmets were deficient in noise attenuation and retention capability. The SPH-4, which was specifically designed for sound protection, provided (and still provides) superior sound attenuation, but the 1970 version provided no more impact protection than the APH-5.
As the sciences of crashworthiness and head injury prevention developed, it became evident that head injuries could be reduced by modifying the SPH-4. Developmental changes improved the impact protection provided by the SPH-4 and led to the development of the Head Gear Unit-56 for Personnel (HGU-56/P).
See USAARL Report No. 91-11 February 1991,’ SPH-4 Aircrew Helmet Impact Protection Improvements 1970-1990’ by Ronald W. Palmar United States Army Aeromedlcal Research Laboratory Fort Rucker, Alabama.
This design of helmet was first used with the Bell AH-1 Cobra attack helicopter by both the Army and US Marine Corps. It was also used in the early Apache AH-64 attack helicopters prior to the IHADSS (Integrated Helmet And Display Sighting System) helmet.
The nose machine gun on the helicopter was slaved to the sighting monocle so that where the gunner looks, the gun is looking as well, thereby increasing accurate fire on target. The helmet has a special clear visor for use with the sighing monocle. 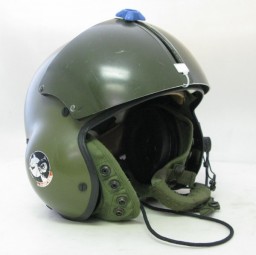 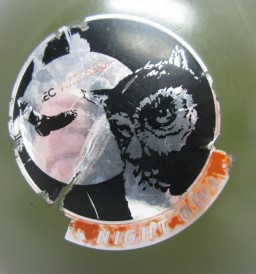