This Alignment Jig has a frame with a number of adjustable threaded bolts which bear against the pilot’s helmet. The other attachment appears to be a rudimentary Night Vision Goggle assembly suggesting that this rig is used to align the NVG onto the helmet.

In March 1982 a demonstrator was produced which had a field of view of 45deg horizontal and 30deg vertical and achieved all the design targets with a low head mounted mass and minimum moment about the pilot's head. Favourable evaluation lead to the manufacture by the Airborne Display Division of flyable prototypes. 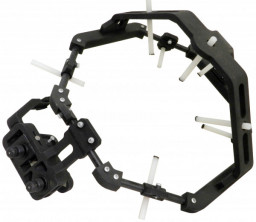