This Oxygen Mask has helmet headset cables and connectors and attachment wire ends compatible with C1139.

This pilot’s oxygen mask contains a microphone to transmit speech to the aircraft's radio and to other crew members if required. Military aviators' oxygen masks have face pieces that partially cover the sides of the face and protect the face against flash burns, flying particles, and effects of a high speed air stream hitting the face during emergency evacuation from the aircraft by ejection seat or parachute. They are often part of a pressure suit or, in this example, for use with a flight helmet.

The Gentex  EFA/ACS Oxygen Mask was designed for the Eurofighter Aircraft (EFA) It has  an inflatable bladder system, which provides Pressure Breathing for G (PBG) capability for extended high performance aircraft maneuvers, while reducing the probability of G-induced Loss of Consciousness (GLOC). 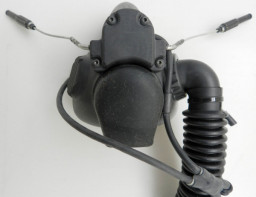 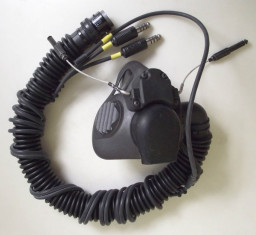