This is an example of a visor with a dichroic patch deposited on the inside of the polycarbonate visor. A dichroic patch is a thin-film filter also called an interference filter and it is a very accurate colour filter used to selectively pass light from the outside world while reflecting the narrow band from the symbology display (usually green although early LED Sights were red). The patch is usually seen on a Helmet Mounted Sight and reflects the image source to the right eye. If the symbology source is a green phosphor the outside world may gain a slight pinkish hue over the area of the patch where the green is taken out of the spectrum. This visor may be from the Jaguar Helmet Mounted Sight

The visor on a flying helmet serves a number of important functions and most helmets are equipped with two visors with an air gap in between; a clear and a dark called respectively the Blast or Display Visor and the Glare or Laser Visor. Visors are usually made of a polycarbonate material and will have a neutral density coating. The most obvious use is to protect the pilot’s eyes from glare and the Glare Visor will do this; a transmission of 15% is typical. This visor reduces solar glare, UV and blue light and thermal transmission. Some systems may have a third visor for laser protection although this function can be incorporated into the Glare Visor if desired.

The second major function is to protect the pilot in the case of ejection particularly from the massive windblast shock as the pilot’s head comes clear of the cockpit. This is the role of the Blast Visor which may also be used to reduce solar effects and on a Helmet Mounted Display this visor may be used to reflect the display image from the optical system back to the pilot’s eyes and as such may have a dichroic patch or more special transmit/reflect coatings over the whole surface. Penetration protection is also provided by the Blast/Display visor and the test involves firing a .22 calibre Fragment Simulating Projectile at the test visor which must survive 3 impacts without penetration.

Both visors must be optically of high quality so that there is no distortion of the outside world nor spurious reflections. 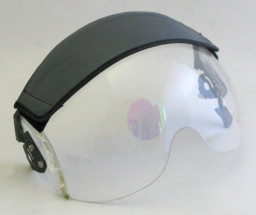 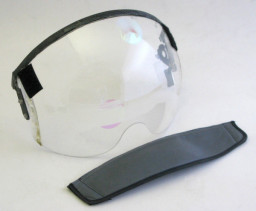