Indirect fire requires a sighting system to aim the gun at a target that is invisible from it. Indirect fire was created by the invention of sights that did not have to be layed (pointed) directly at the target. These sights accurately point the gun in the direction (line) of its target and with the correct angle of elevation for the shell to reach the target.

The need to set the elevation to achieve the required range had been known from the early days of cannons and simple mechanisms were developed to enable it. However, pointing the guns so that they could easily attack unseen targets was a more difficult problem. Originally open sights were used with an open rear and foresight mounted on a bar that rotated against an angular scale. By the early 20th Century the open sight device was replaced by an optical device, called a 'dial sight' by the British.

The angle ordered was set on the dial sight's main scale and the gun was traversed until the sight was aimed at the director (or aiming point), this meant that the gun was layed (pointing) along its zero line. Using the sight's main scale, and without moving the gun, it then recorded the angles to at least two gun aiming points (GAP). One was selected for current shooting, the dial sight layed on it and the slipping scale (sometimes called the 'shooting scale') was adjusted until it read Zero and then clamped to lock it to the main scale. Firing data, switches from the zero line, were applied using the slipping scale.

In 1943 a new sight, No 9, was introduced and lasted with modification into the 1990s. Dial Sights had a periscopic configuration with a rotating head, when the scale was set to zero the sight head was aligned with the axis of the barrel. The Number 9 Dial sight was used on many field guns, including the 25Pdr, 4.5" gun and 5.5" gun.

The dial sight was mounted in a dial sight carrier that was fixed to the saddle on the left hand side of the gun. Obviously it was important to ensure that the sights were accurately aligned with the bore of the barrel.

This is probably a WWII version and is missing the rubber cap around the eyepiece and the overall case. It may have had a leather case made by a firm called D M & S Ltd.
( For more information see http://nigelef.tripod.com/sights.htm )


For more information see this webpage.

This unit is sprinkled with ID marks, presumably some for sub-assemblies, and all those visible have been listed. 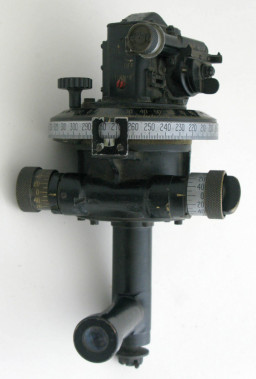 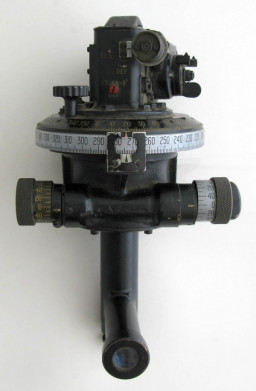 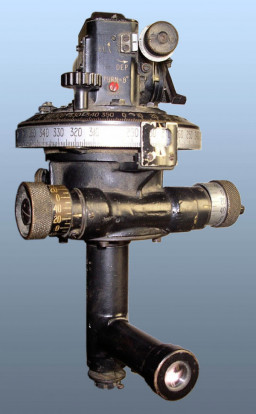 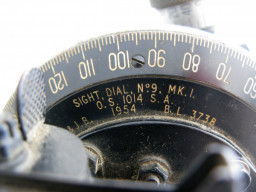