As bomber speeds increased in the 1930s, wind-screens were fitted to protect gunners. The next step was to enclose the gunner in a glazed cupola which could rotate. Some manufacturers then decided to develop enclosed, power-operated turrets, with the guns remote from the gunner's eye line. It followed that the sight also had to be remote from the guns, but linked to the gun movement. Barr & Stroud's answer was the GJ3, which, when fully developed, was to be produced in larger numbers than any other British sight. It consisted of a detachable lamp unit and an upright sight head, the glass reflector screen being fitted to a housing surmounting the lens tube. The reflector housing supported a swing-in-type sun screen operated by a small knob at the side.

The prototype sight was tested at the weapons department at Farnborough, where the optical system and electrics were proved to be satisfactory. It was then sent to Martlesham Heath, where it was installed in a Parnall Hendy Heck fitted with two Browning guns, and air firing trials were carried out at various heights and at ground targets. The trials reports were favourable, although it was recommended that a protective hood similar to the Mk I should he fitted. It was decided to fit the reflector screen into a slot fixed to the inside of the hood, and incorporate the sun screen at the rear operated by a knurled knob. The sight head could be adjusted for elevation, and it was clamped onto the lens tube, giving a means of lateral adjustment. The sight was reassessed and found, in the words of the official report, to be "an accurate and compact sighting medium suitable for use in powered turrets, and situations where the Mk II* would not be ideal". The company was given a production order for an initial batch, the sight being given the service title Mark III Free Gun Reflector Sight.

The Mk III series proved to be one of the most successful reflector sights ever produced. Virtually every turret in RAF Bomber Command used it, and it was adopted by the US Navy as the Mark 9, produced in America by the Woolensak Optical Co. of Rochester, NY, and in Australia by the Kriesler (Australasia) Pty Ltd. As well as turret use, it was fitted to free-mounted Vickers K guns, and, being less obtrusive than the Mk II*, was used as a pilot's sight on many multi-engined aircraft. The final redesign was the incorporation of a tilting head mechanism for rocket firing.

In most turrets the sight was mounted at the gunner's eye level and connected in elevation to the gun cradle by rods and cranks (in rotation the sight with the turret).

The Mk IIIA* was used on many free gun mountings, and on heavy-calibre installations such as the Molins gun on the Mosquito XVIII. The most recent use was probably the twin Hispano mountings on South African Shackleton IIIs. 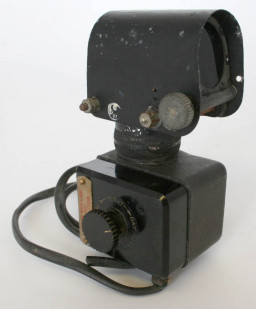 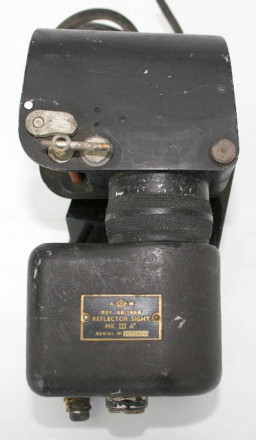