Artificial Horizon Mk.5.
6A/5585 [crossed out]
Made in England by
Sperry Gyroscope Co. Ltd
Brentford, Middx.

The artificial horizon, (also known as an attitude indicator (AI) or gyro horizon) is a flight instrument that informs the pilot of the aircraft orientation relative to Earth's horizon, and gives an immediate indication of the smallest orientation change. The miniature aircraft and horizon bar mimic the relationship of the aircraft relative to the actual horizon. It is a primary instrument for flight in instrument meteorological conditions.
The heart of the AI is a gyroscope (gyro) that spins at high speed, from an electric motor. The gyro is mounted in a double gimbal, which allows the aircraft to pitch and roll as the gyro stays vertically upright. A self-erecting mechanism, actuated by gravity, counteracts any precession due to bearing friction.
The instrument is fitted with a 950mm braided cable.
This item is marked (in ink): "NZA/R/1/76" which may indicate when it was changed from version 6A/5585 to INST A/339.
This item is also marked: "Do Not Jar Handle Like Eggs" and: "This artificial horizon is manufactured under one or more of the following British patents
542565, 619939, 619945, 622270, 623356, 624564, 625288, 625415, 676005,
678768, 680944, 682528, 718124, 724428, 726627, 726890, 731737
This type of instrument was fitted to the Hawker Hunter and Westland Whirlwind Helicopter aand many more. 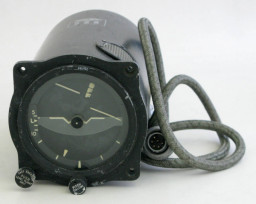 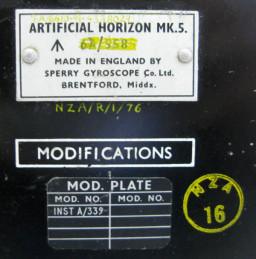 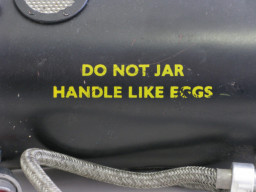