This is an example dating from 1971 and is marked ‘Licencee of Northrop Nortronics USA. Spec DHM20074/2B’. It is used in the guidance system of the FGM-148 Javelin - a United States manufactured man-portable 3rd generation anti-tank guided missle.

In a rate indicating gyroscope, the gyroscope is turned at a steady rate about its input axis and a torque is applied to the spin axis. This causes the gyroscope to precess about the output axis. The rate indicating gyroscope consists of a damping fluid between the float assembly can and the outer casing. This viscous fluid resists the motion of the gimbal precession. This causes the gimbal to accelerate initially in the fluid, until the damping effect is equal to the precessing force. The rate of precession will hence be directly proportional to the rate of turn of the gyroscope about its input axis and the total angle of movement about the output axis will be proportional to the speed and length of time the input axis is turning.

In a typical application (e.g. an aircraft), the output axis could have revolved 180 degrees clockwise in 20 seconds, then 80° anti-clockwise (say if the aircraft was changing direction again). This output would then be fed to a computer to calculate the total distance traveled

The Miniature Rate Gyro (MIG) employs a gimbal floated at neutral buoyancy in a fluorocarbon fluid and pivoted between jewelled bearings. The manufacture and assembly of such a gyro called for standards of precision unprecedented not only in industry but even in specialist laboratories. A crucial issue was vibration. The Instrument Wing was located between the Eastern Region main line to the north and the new Stevenage by-pass road, and further vibration came from machinery in the company's plant—and even from the footfalls of the staff. Accordingly, test equipment was mounted on concrete plinths carried on 50-ton concrete rafts supported on air bellows resting on heavy foundations deep in the earth. 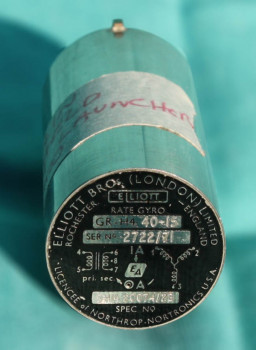 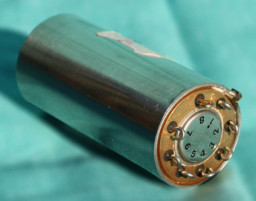