A rate gyro is a type of gyroscope, which rather than indicating direction, indicates the rate of change of angle with time. The gyro has only one gimbal ring, with consequently only two planes of freedom and is used to measure the rate of angular movement. This unit has a Pitch and a Yaw Rate Gyro in the same package (they are frequently collocated near the wing root). Three such units form part of the CSAS.

This is an 'A' Model developed for MRCA, later Tornado.

Inertial devices such as rate gyroscopes, rate integrating gyroscopes, and accelerometers are common in modern navigation systems. Other uses include active stabilization of cameras, platforms, and other motion sensitive applications.

Inertial devices therefore internally contain the required resistance to movement either in the form a spinning mass (a source of inertia) such as in gyroscopes, or a suspended mass such as in accelerometers. A rate integrating gyro is used to measure the rate of angular movement.

In a typical application (e.g. an aircraft), the output axis could have revolved 180 degrees clockwise in 20 seconds, then 80° anti-clockwise (say if the aircraft was changing direction again). This output would then be fed to a Navigation computer to calculate the total distance traveled.

The Miniature Integrating Gyro (MIG) employs a gimbal floated at neutral buoyancy in a fluorocarbon fluid and pivoted between jewelled bearings. The manufacture and assembly of such a gyro called for standards of precision unprecedented not only in industry but even in specialist laboratories. A crucial issue was vibration. The Instrument Wing was located between the Eastern Region main line to the north and the new Stevenage by-pass road, and further vibration came from machinery in the company's plant—and even from the footfalls of the staff. Accordingly, test equipment was mounted on concrete plinths carried on 50-ton concrete rafts supported on air bellows resting on heavy foundations deep in the earth. 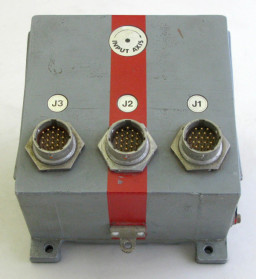