Vibrating shell gyros have a bell-like structure; the Solid-State Angular Rate Transducer (START) Gyro is cylindrical in shape. START operates on the principle, that Coriolis forces produced by rotation cause a transfer of energy between two of the gyro's modes of vibration.

START is a gyro dependent for its operation on the rotation sensing properties of a resonant shell. A complete gyro requires both a resonant element (the cylinder) and a means of maintaining and measuring the vibration pattern about it. START uses a small electronic module for these vibration control purposes and to provide a usable interface to the user systems. The START Gyro is capable of withstanding the high shock environment of precision guided munitions (PGM). Successfully shock tested at 25,000g on a 155mm artillery shell trials range, this low-cost device was developed for short time of flight applications including precision guided munitions, terminally guided submunitions, hypervelocity missiles and light anti-armour weapons. However, the device has since seen application in active suspension systems in cars where its low cost and extreme ruggedness is ideal. It is simple to produce and therefore ideally suited to inexpensive mass production techniques.

The START gyro trades simplicity for performance and is a relatively low-cost item. The resolution is about 0.02 deg/s and scale factor of 0.3% and START typically has g-sensitivity of the order of 0.05 deg/s/g normal to the input. Start-up time is in the range 0.1-0.5 s; the drive power is about 10 mW.

The range is adjustable up to 3000deg.sec. The Power requirement is +/-15VDC at about 1Watt. The weight is 40gms and overall dimensions are 24mm diameter (the square mount is 26mm) and 28mm length (with another 10mm for the pins).

In 1990 GEC Avionics Guidance Systems Division were a finalist in the Prince of Wales Award for Innovation with the START Gyro.

This was Marconi Electronic Systems product, produced at Rochester, that went into many systems; most notably when developed further with Bosch to form an anti-roll sensor for car suspension control. Mercedes used the system. When the merger with BAE took place and BAE Systems was formed there existed a solid state gyro business in Plymouth that was bigger in business and that became the centre of further gyro production while activity at Rochester declined and closed down. (Note courtesy of Steve Pink) 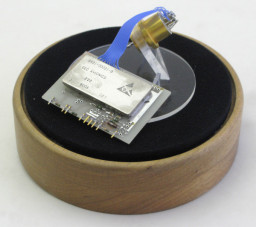