The South Gyle (Edinburgh) site of BAE Systems (CAGE Code K0662), previously Ferranti, had a good record in making Head Down Displays and this site and Rochester collaborated on exploring the forthcoming technologies such as Liquid Crystal panels. By 2001 a number of HDD employing large LCD panels had been constructed and a trial took place on the A-10 aircraft.
In 2005 the U.S. Air Force contracted Lockheed Martin to provide precision engagement production kits to modify the A-10 Thunderbolt II (aka Warthog) aircraft. The modification kit included a central interface control unit, multifunction colour displays, and new cockpit controls. This upgrade enables the A-10 to use advanced precision-guided weapons, such as the joint direct attack munitions and the wind-corrected munitions dispenser. The aircraft also will be able to accommodate advanced targeting pods, which will allow for increased situational awareness. The initial contract, valued at $37.8 million, was part of a larger plan to outfit the entire A-10 fleet with precision engagement kits over the next five years. The total contract value over the five-year span is estimated at $168 million. 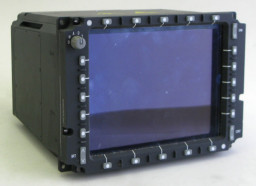