This is a TVTab supplied as a complete unit from AEG. Marconi-Elliott Avionic Systems Limited subcontracted the design of the display units to AEG-Telefunken, but retained the waveform generator design and overall equipment control responsibilities itself.

In the Tornado, the large amount of data available from the central computer and the need to provide a computing system control unit, which is useable in the demanding low level high speed flight regime led to the adoption of a multi-function electronic display system (TV Tabular Display) as the principal means of communication between the main computer and the rear seat Navigator. Two identical display units are mounted to the left and right of the Navigator’s combined radar map display in both the Tornado IDS (Interdictor Strike) and ADV (Air Defence) variants.

The main computer controls the generation of synthetic data for these CRT displays according to the mode selected. The display units also accept video information (for example from sensors such as infra-red systems, radar or TV missiles) and can display pictorial information overlaid by the synthetically generated data. These are in effect computer terminals allowing the Navigator to program or reprogram the main computer and to display all information available in either tabular or graphic form. The navigator selects the display mode (format) and inserts or amends data by means of the keyboard provided beneath each screen. Additionally the TV mode enables the display of raster type pictures from other sensors such as infra-red systems, radar or TV missiles.

The equipment uses television raster techniques throughout because of the reduced complexity, power and cost of the display unit. The waveform generator circuits are packaged on multilayer printed circuit cards and interconnected by a multilayer motherboard. Great care has been taken to ensure efficient conduction of the heat generated to a ‘cold wall’ heat exchanger forming one side of the unit. Well-established computer thermal modeling has been used to optimise the component layout and heat sink design and to predict each individual part temperature.

The display units incorporate a number of unusual features. The first and most obvious of these concerns is the CRT which has to be both rugged and of exceptionally high brightness for viewing in a cockpit in strong sunlight conditions. AEG have developed a bi-potential lens, which, coupled with a high beam current and a high-voltage anode provides the necessary line brightness at the screen. The use of narrow band phosphor coupled with a compound chromatic filter enables a minimum specified contrast ratio to be maintained even under extreme cockpit illumination conditions equivalent to bright sunlight. Photo-sensors automatically maintain the display brightness at an acceptable level as the cockpit illumination conditions vary. To maintain a precisely rectangular picture, circuits compensate the scan waveforms for the geometric errors inherent when using a flat CRT screen.

The top row of the three tiers of push buttons on the keyboard are unusual in that they are multifunction. Depending on the mode selected, they are labelled on CRT itself by the main computer.

Marconi-Elliott Avionic Systems Limited subcontracted the design of the display units to AEG-Telefunken, but retained the waveform generator design and overall equipment control responsibilities itself. 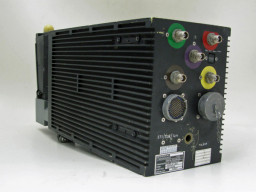 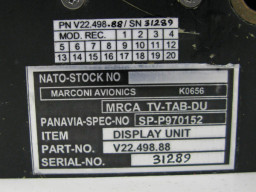 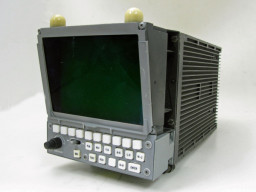