This PDU does not have any nameplate but was probably made around 1973. This remains one of the smallest HUD's the company has made with a Display Unit containing little more than the CRT projecting through a 3" optic giving a 20deg TFoV.

The success of the A-7 Corsair HUD was followed by a system for the H, M and N variants of the McDonnell Douglas A-4 SkyHawk. About 465 systems were delivered, from about 1970 to 1978 to the U.S and elsewhere. The system was distributed into the Pilot’s Display Unit (PDU), Video Signals Unit (VSU), High Voltage Power Supply (HVPSU) and the Electronics Unit (EU). It was recognised that all of the information used in the weapon aiming calculations was already being supplied to the HUD to draw the symbology format for the attack phase. A modified interface design, faster logic and expanded store in the waveform generator gave a very effective and self-contained, greatly improved, gun, bomb and missile sight and aiming system which could be installed in many different existing aircraft. Most importantly: because the unit had its own highly capable A to D interface, it could use the existing sensors, gyros, etc. in any aircraft without requiring major internal systems modifications in the aircraft.

As only one display and one weapon aiming format were required simultaneously the HUD Processor speed was found to be adequate for both tasks. An Air to Air gun aiming and a CCIP bombing mode were provided initially.

The HUD Weapon Aiming Computer HUDWAC allowed a precise calculation of Lead Angle. The wider dynamic range of the HUD also permits closer matching of the pilot and airframe kinematics for target acquisition and tracking. This was a big advantage over even the most sophisticated Gyro Gunsight. It was now possible to give displays with better visualisation to the pilot with bullet line or tracer line and these ‘line cues’ increased the probability of a snapshoot against crossing targets over the ‘point’ cue fixed reticle. The HUD system for the US Marine Corps’ A-4M Skyhawk attack jet was the first product of this new concept a HUD weapon aiming computer or HUDWAC which proved to be a world first for the Company. In later designs the Program Store was increased to 4096 words and the Data Store to 128 words the weapon aiming capability was significantly increased. Such enhanced systems were flown on the Mirage Milan, the YF-16 and the YF-17. This system finally reached an 8k instruction PROM store. 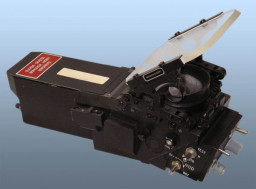