A-7 Head Up Display

The ILAAS PDU design was repackaged and a new highly innovative optics was added. The same ceramic CRT was used as it had to operate in a high vibration environment with buffeting of high-speed flight but also gunfire since the A-7 gun is only about five feet away from the HUD. The screen was a nominal 2inch diameter and was ground optically flat. The CRT fitted into a mounting ring with shims to maintain focus and alignment and could be replaced in about eight minutes.
The Head-Up Display optics consisted of a seven-part lens system and coated fold-mirror glass worked to tolerances of 0.05 per cent. Anti-reflection coatings were applied throughout. This design had a 5inch exit lens giving a 20deg TFoV and had a two-position Combiner.
The Combiner Glass had coatings that allowed 70% of the outside world to be transmitted to the pilot’s eye and 30% reflection of the display symbology luminance from the exit lens was returned to the pilot. The CRT operated at a maximum of 10,000ft Lamberts and of course this was attenuated by the relay lens system, the fold mirror and Combiner to give about 1260ft Lamberts to the pilot. A nominal 10,000ft Lambert outside world was used (this is equivalent to sunlit white cloud and is still the standard) and this was attenuated by the windshield and the Combiner giving around 6,300 ft Lamberts to the pilot. Equating these two figures the display overall had a Contrast Ratio of 1.2.
The optics incorporated a clever split prism with dichroic coatings to allow the injection of a red Standby Sight from each side which was coupled to small lamps by fibre-optics. (Fig.13.4) The company research laboratory FARL came up with the design for the Standby Sight between 1966 and 1967. This sight was mechanically depressible and was intended to be used as a back-up but in practice the Navy pilots were said to set brightness to a maximum for both the CRT display and for the Standby Sight! For night operation a moveable red Melinex blind could be drawn across to dim the display; incidentally this blind would burn nicely if left across under conditions where direct sunlight would strike it.
The PDU had twin Auto-Brilliance sensors fitted forward of the Combiner Glass. These are more accurately called auto-contrast sensors and controlled the display luminance to maintain a constant Contrast Ratio to the outside world.
The Control Panel by the later standards of sophisticated Up Front Control Panels was very basic with rotary controls for PDU Luminance, Standby Sight Luminance, Mils Depression (with a mechanical read-out window) and to operate the Night Filter. There were switches for Scales Rad or Barometric Altitude, Test and Panel Lights.
The A-7 PDU was fitted with a film recording cameras by Photosonics, fitting round the rim of the optical assembly above the Control Panel control panel. 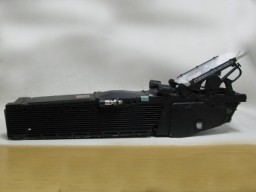 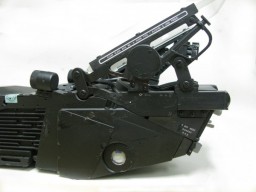 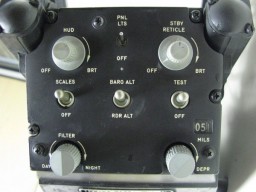 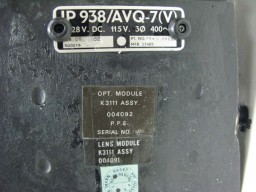 The A-7 Head-Up Display (symbology)

Painting of A-7 Corsair

The A-7 HUD, EU and PDU shown by Colin Marshall

A-7 PDU undergoing test and alignment