This is an original prototype Combiner Glass. The Combiner Glass is designed to fold down flat across the exit lens and this early design has a single pin glued in place on the left-hand side of the glass to support the locking mechanism. This was changed on the production version to a support strip down the Glass which suggests that the pin alone was not strong enough.

July 1953 saw the issuing of Naval Staff Requirement NA.39 calling for a carrier-borne strike aircraft with a large range capable of carrying a nuclear weapon under enemy radar cover and striking enemy shipping or ports. Blackburn Aircraft won the tender to produce their design which became the 'Buccaneer'.

The prototype first flew on 30th April 1958. The specification called for an Attack Sight giving navigation and weapon release information for the low level attack mode. The Air Arm branch of the Ministry sponsored the development of a Strike Sight System which was the name for the overall weapon aiming and release system. The Royal Aircraft Establishment designed the Strike Sight System and Cintel manufactured the Head-Up Display (HUD) element of it; the system was first integrated in 1958.

The Cintel Head-Up Display business was taken over by Elliotts and the Buccaneer PDU was manufactured and further developed continuing up to a Mark III version with a total of 375 systems made; it was given a 'fit and forget' title by the Royal Navy and was still in service nearly 25 years later. By successive commercial acquisitions, BAE Systems thus has a claim to the world's first Head-Up Display in operational service.

The Strike Sight is a sighting and computing system providing the pilot with visual signals to enable him to steer the aircraft to the target and to perform the delivery manoeuvre. It consists essentially of a computer, a gyro and a pilot's display.  In the case of a blind attack, the strike   sight   system is fed with information from the radar and the observer.  The pilot is given   tracking and pull-up information and the computer measures the aircraft flight path and determines the weapon release point.  Airspeed, target range, range to start of pull-up and aiming information are optically projected as a group of symbols on to a partial reflector in the pilot's line of sight from a bright cathode ray tube. In visual dive attacks the target can be seen through the sight recording camera produces  a  photographic record of events  during  an attack  as seen  by the pilot  on his display.

The Buccaneer Head Up Display was supplied in two pressurized containers; the Head Up Display Unit and the Waveform Generator. The Rank Cintel precision tube had a two inch screen and had a broadband green P1 phosphor (described as zinc orthosilicate or willemite). Electro-magnetic deflection and permanent magnet focusing were used. The tube operated with a 20kV EHT, a beam current of 20-100microamps and gave sufficient luminance for the symbology to be visible against background illumination of 10,000ft Lamberts thereby achieving a contrast ratio of 1.2:1. The spot size was 0.007 inch and resolution was approximately 280 lines. The CRT was warranted for about 50 hours [146].The unit refreshed the display at 33Hz; only just fast enough avoid flicker but the P1 phosphor if the CRT in the Display Unit fortunately had a reasonable persistence.

The Mark I display had a valve EHT Unit which took ages to power up. Later versions had a solid state EHT.  The HUD had a 20deg Total Field of View with a 4inch exit lens and a single fold down semi-silvered Combiner Glass. The Combiner was optical glass coated with titanium dioxide to give a 40% reflectivity and no colouration of the outside world.  The controls were basic consisting of a Brightness function only. The aft end of the unit had a large rubber cushion to protect against head impact reminiscent of the earlier Gyro Gunsights. This bumper was possibly deemed necessary for protection from the severe deceleration on carrier deck landings.

The symbology for the display was generated by analogue circuits within the "dustbin" Display Waveform Generator Mk2 Type 'A' on circular cards reminiscent in shape of an artists palette. Symbol shapes were created by the Waveform Generator and displaced by DC voltages derived from the data inputs. The system was quite advanced with the capability to drive a second display unit but symbols could only be changed by altering the circuit boards. Later Waveform Generators began to use printed circuit boards. This was one of the earliest applications of silicon semiconductors in place of thermionic valves (vacuum tubes) for symbol generation.

The original optical design and manufacture for the Buccaneer Strike Sight was undertaken by Wray Optical of Beckenham - just around the corner from Lower Sydenham where the Cintel facility was located. 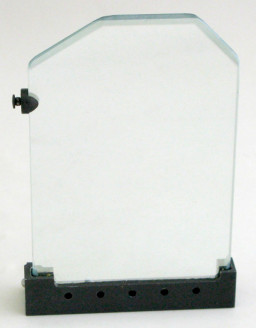