The US Department of Defense ran a Dual Use Science and Technology (DUST) programme which allowed the DoD and a Contractor to establish work that benefits both parties. A guiding principle is for the DoD was to try to leverage technological advances in the commercial sector to help meet future defence requirements. In 2005 the Company participated in a joint Boeing Phantom Works, AFRL (DUST) programme to evaluate fused sensor and synthetic imagery on helmet-mounted (HMD), HUD and HDD displays. The system installed on the C-17 included three FLIR sensors providing a 192° wide field of view. Using a BAE Systems head-tracked, visor-projected HMD, the pilot was able to look anywhere within the fused EVS/SVS image, including down "through" the instrument panel and an aft looking IR image of the cargo hold. A BAE developed digital light engine HUD displayed images processed at high speeds using field-programmable gate arrays. This reduced latency in images, which were displayed as close as is feasible to the ideal "single timeframe" speed of 16.6 milliseconds.’ BAE Systems supplied a standard C-17 Head Up Display modified with a Digital Light Engine using a digital micromirror device (DMD) from Texas Instruments (TI DLP®) and laser illumination. This aspect of the project helped in the development of a solid state replacement for the CRT which was becoming difficult to source and lacking in resolution for the modern sensors.
The Texas instruments device is described in TI DLP description

The Boeing C-17 Globemaster III is a large military transport aircraft developed for the United States Air Force (USAF) from the 1980s to the early 1990s by McDonnell Douglas. The C-17 commonly performs strategic airlift missions, transporting troops and cargo throughout the world; additional roles include tactical airlift, medical evacuation and airdrop duties.

Boeing, which merged with McDonnell Douglas in the 1990s, continued to manufacture C-17s for export customers following the end of deliveries to the U.S. Air Force. 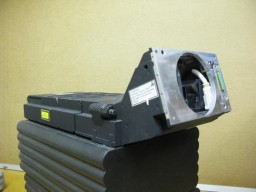 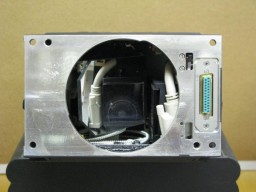 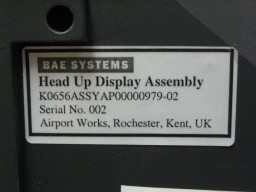