None on the assembly but written on the attached masking tape label is: ""Glass from 161. Unable to set up. Suspect glass."

This Combiner Glass is similar to that used on the 2020 and 2022 Civil HUD systems but is black, suggesting that it is a prototype.
The pivoted rod is 150mm x 10mm diameter and connects to the retraction mechanism. 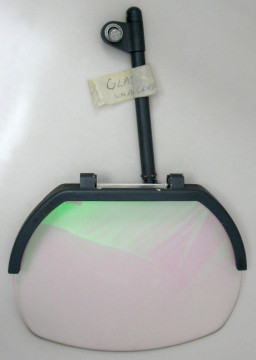