An explanation of its operation can be found in this Wikipedia core store article
Core memory is non-volatile storage—it can retain its contents indefinitely without power. It is also relatively unaffected by EMP and radiation. These were important advantages for fighter aircraft,

There was a development programme preceding the A-7 project called 'Integrated Light Attack Avionic System'  (ILAAS) and for this the Team Leader Jim Machin and the team  developed a 2K rope core memory Read Only Memory (ROM) from scratch as it was necessary to ensure non volatility and a very wide temperature range (in fact he achieved about -70C to around +120C).  The approach used large ferromagnetic cores threaded with a number of copper wires, threading or bypassing the ferrite cores. The design gave a store cycle time of around 1 microsecond. and avoided the ½ current drives of a conventional core stack. (For the subsequent A-7 HUD production a manufacturing source was established in Portugal drawing on their lace making skills.) The provision of reliable storage was a problem and a magnetic core store, of 2048 words, was used for the main program store. The new 16bit bipolar RAM was used for the data memory but to keep costs down this was limited to 64 words. In the A-7 the weapon aiming calculations were performed in a central computer and although such data as airspeed, height, aircraft velocity vector and altitude were provided to the HUD for generation of the symbology this design was not used  to carry out the weapon aiming itself. The original 18/12 processor used a programmable memory of 2K read only rope core memory. There was  a story that hese were assembled at one time  by the lace maker ladies of Portugal; following a workers revolution this was then shifted to the lace makers of Malta  and finally to Hong Kong. The production derivative extended the memory to 4k to allow for weapon aiming computation. 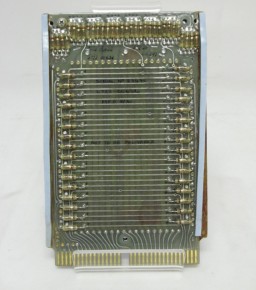 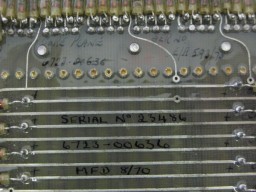