This is a chassis for the Enhanced Display Unit version of the F-16 PDU which is distinguished from its predecessor by having the two deflection circuit modules externally located on the chassis sides.
Although labelled Chassis Electrical this chassis has not been fitted with its electrical elements (motherboard and wiring), though it does have a photocell assembly (ABS - Automatic Brightness Sensor. This unit is currently on long term loan for engineering development. 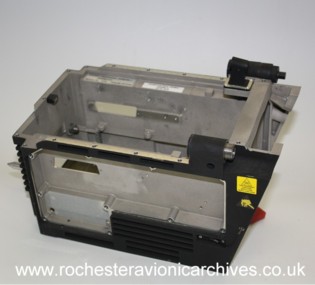