The Company designed a PDU based on the F-16C/D design for retrofit to aircraft in countries where the F-16 was the primary fighter aircraft and the F-5 was a 'lead-in' trainer and an effective fighter in its own right. This is probably an early version to support the Northrop programmes.
The Chassis contains the Circuit Modules, Power Supply and interfaces with the Optical Module.

An upgraded  design of the PDU  was supplied from the mid 90s onwards which was based on the F-16C/D HUD system.

The PDU had a double Combiner but with the upper being about half the lower in length (there is no need for the forward lower section as the image transfers to the upper aft section to enhance the vertical field of view). The Up Front Control Panel incorporated a multiline display but was otherwise similar to the standard.

Northrop itself was a late entrant to the F-5 upgrade market, and its offering in 1994 to develop an F-5 replacement drew heavily on the abandoned F-20 programme. The company's upgrade was the classic modelled on the F-16, allowing the F-5 to be used as a lead-in trainer or a combat aircraft, and the concept was flight-tested in a USN F-5E late in 1994.

In addition to the new HUD system the upgrade package usually included such items as a 1553B databus, new mission and air-datacomputers and monochrome CRTs or colour LCDs, new radar, laser-inertial navigation system and a data transfer module.

The HUD therefore has to be a long thin design although in these upgrades as many as possible of the F-16 modules were employed.  The original F-5 PDU, and prior to that the LCOS,was installed vertically into a structure boresighted as part of the aircraft but this F-16 based design used an adjustable Mounting Tray into which the PDU fitted horizontally on the standard F-16 bolts. 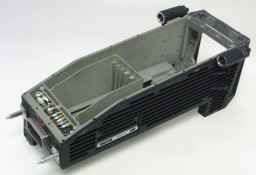 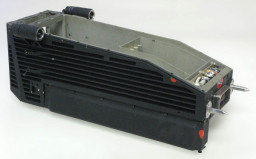