A Matching Card with deflection current feedback resistors is fitted to the flat area.

The F-5 was sold to many countries and provided a simple but effective fighter aircraft with potential for avionic upgrade. The Company worked on various upgrade programmes and in each case a replacement for the existing  Lead Computing Optical Sight (LCOS) was offered.

The earliest such replacement is seen in Catalogue No. C0022. The HUDWAC consists of three line replaceable units; the Pilot’s Display Unit (PDU), an Electronics Unit (EU) and a Weapon Data Input Panel (WDIP). 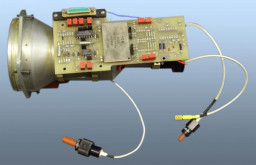