A Camera is used with a Head Up Display to view the symbology overlaid on the outside world as close as possible to the view that the pilot has through the Combiner Glass. The Camera is a training aid to show how accurately the fighter aircraft engages with the target and ultimately can verify the result of a real engagement.

The Camera assembly is usually mounted on top of the HUD, above the Control Panel, directly aft of the Combiner Glass.

The earliest Cameras used film strip with a replaceable film module and these were quite large and obstructive to the pilot.  However with the advent of diffractive and waveguide optical systems the Combiner acts as part of the optical collimation and is not just a reflector so that the symbology is not focused at the normal location used.  A new solution had to be found and the Camera is instead located forward of the Combiner and the HUD symbology is scan converted and accurately mixed with the Camera video. 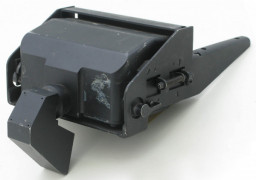