This is the Cathode Ray Tube (CRT) from the A-4 PDU. In common with most of the CRT’s it was supplied by Rank. The deflection yoke was probably supplied by Muirhead but this and the Matching Card were separate items in the early PDU.

All HUD CRTs used by Elliotts -BAE Systems have had a deflection coil which magnetically deflects the beam and focussing is electrostatic. The older units designed by Cintel employed magnetic deflection and permanent magnet focussing.

The inside face, on which the phosphor is deposited, is accurately aligned to the mounting flange of the tube to ensure it coincides with the optical module's image plane. For the earliest Head Up Displays the Cathode Ray Tube was supplied to the Company, usually from Brimar (Rank Electronic Tubes), who separately purchased the  Deflection Yoke from a source such as Muirhead and assembled this in-house  within a mu-metal housing. At one time the Company also wound the Deflection Yokes but eventually it was determined that it was much better to have the CRT supplier deliver a fully aligned Tube Unit Asembly with a Matching Card 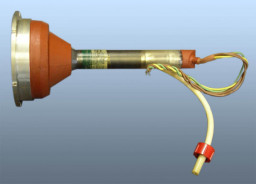