This is an F-16A/B variant of an experimental design. The development of the advanced coating technology was first successfully carried out by Watshams (later absorbed into PPE ). Pilkington made their first Dual Combiner with graded coatings in the early 1980’s for a project called SINT but that project eventually used a single combiner.

The Total field of view (TFoV) of a Head Up Display is defined as the “Total angle subtended by the display symbology seen with head movement” and it is largely determined by the size of the exit lens in a conventional refractive optical design.

The vertical field of view can be extended by the addition of a second Combiner Glass forward of the first glass and extending higher up. The optical system then provides an IFoV with a second but smaller double circular field above the first. Now, the image has to transition from the aft glass to the forward glass in a smooth manner and this done by using graded optical coatings which are traditionally a neutral density coating. Thus the coating on the aft glass reduces in reflectance at the top as the forward glass coating increases in reflectance and the transmittance, of course, does the opposite. The whole effect must be achieved without any obvious display artefacts and even more important there must be no false horizon lines created. This last issue is aided by making the top of the Combiner Glass angle down in the forward direction on the sight line from the design eye position. To achieve this gradation of coatings requires a sophisticated deposition technique. The Company used this optical design on the F-5 HUD and increased the vertical FoV by about 3°. Originally the graded coatings were made by Watshams who were experts in coating optical elements. 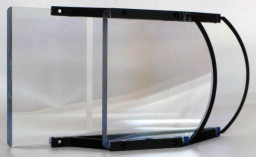