This is the Electronics Unit from the F-16 AFTI programme and it is also labelled: "AFTI/F-16 CAS". A close-air support (CAS) test program finally began in the summer of 1991, and was focused on demonstrating technologies to find and destroy ground targets by day or night, and in bad weather. This made use of low altitude and manoeuvring, and was known as close air support and battlefield air interdiction. In addition the symbology was much modified in the Electronics Unit to work with the capability that the AFTI now had with its new digital flight control system however the system overall was not capable of presenting raster video.

In the late 1970s, the USAF laboratories at Wright-Patterson AFB, Ohio, created the Advanced Fighter Technology Integration (AFTI) program office to perform flying demonstrations of advanced technology systems and capabilities for fighter aircraft. In March 1980, General Dynamics began converting the sixth full scale development F-16A to serve as the technology demonstrator aircraft for the joint Flight Dynamics Laboratory-NASA Advanced Fighter Technology Integration (AFTI) program. An F-16 was chosen because of its modern features, its ease of integrating advanced systems, its low operations and maintenance costs, and the reduced risk of transitioning the technologies to the Air Forces large F-16 fleet.
The AFTI F-16 built upon GD's experience with its YF-16 Control Configuration Vehicle programme, and the AFTI F-16 even received the twin pivoting vertical ventral fins from the CCV aircraft, which were likewise installed under the air intake. The aircraft was also fitted with a narrow dorsal fairing along its spine to house additional electronics. Technologies introduced and tested on the AFTI F-16 include a full-authority triplex Digital Flight Control System (DFCS), a six-degree-of-freedom Automated Manoeuvring Attack System (AMAS), a 256-word-capacity Voice-Controlled Interactive Device (VCID) to control the avionics suite, and a helmet-mounted target designation sight that permitted the gimballed forward-looking infrared (FLIR) device and the radar to be automatically "slaved" to the pilot's head movement (this was the Falcon Eye). The aircraft received advanced avionics and cockpit modifications, which were forerunners of those systems in the F-16C/D first produced in 1984. An experimental HUD was one of those modifications.

The AFTI F-16 phase I tests began following its arrival at Dryden on July 15, 1982. The initial flights checked out the airplane's stability and control systems. These included a triplex digital flight control computer system, and the two triangular "chin" canards mounted under the aircraft's intake.

The AFTI F-16 left Dryden for the last time on November 4, 1997. Over a period of 15 years, it had made more than 700 research flights. Although no longer used by NASA, it continued to be used for test missions. Its final project was as the hardware and software testbed for the X-35 Joint Strike Fight prototype. On January 9, 2001, the AFTI F-16 was retired to the Air Force Museum.

The legend "27489" on the Ident labels of the boxes is a defunct CAGE code for the Rochester site of Elliott Bros (London) Ltd. 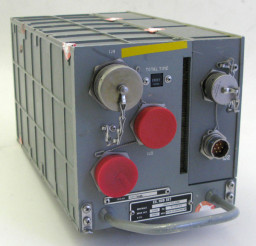